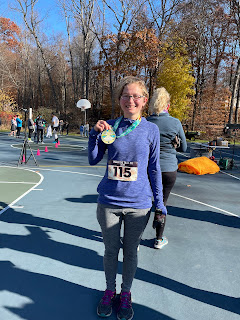 15 hours after landing in the US, I ran a 5k trail race where you get a slice of pizza at the end. Off a plane and onto the trails. Why Pizza the Trail I'm in the US with my family for 6 weeks. I of course had to look at what races were happening while I'm visiting. I came across this 5k trail race that had 2 main selling points to me: you get a slice of pizza at the end the course was using (relatively) new trails along the lake I spent my childhood summers at  It was taking place the morning after I was set to arrive in the US. I held off booking thinking maybe racing so soon after a long day of travel wouldn't be the best idea. But I do love racing and it was only a 5k, with pizza, at my favorite place in the US. I felt okay after I landed, so I signed up as soon as I got back from the airport. A long wait in the cold The race website said pack pick-up 8:15am, race start 9:30am. It wasn't clear if that meant pack pick-up FROM 8:15am or AT 8:15am, but I aimed to get t
Post a Comment
Read more 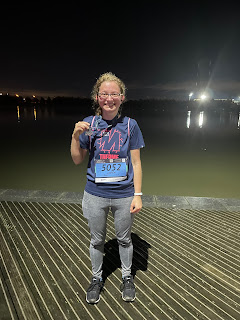 After my first marathon, I took it easy in November and tried out my first night race, running 5k around the Kelpies.  Night runner turned night racer. Fundraising for JCWI in 2021 This is the 11th recap post of my 2021 monthly running challenges. These challenges are part of my fundraiser for the Joint Council for the Welfare of Immigrants (JCWI).  Read my blog post on why I'm doing this fundraiser My previous recaps Donate to my JustGiving page Recapping the horrors of UK immigration each month As part of my fundraising efforts, I am also raising awareness about what's happening in the world of UK immigration each month. I want people to understand just how much awfulness happens in 28 to 31 days. My recaps will be over on my Medium site. How the UK immigration system hurts people: October 2021 Why night racing and why Supernova 5k At the end of my Manchester Marathon post, I said my November challenge would be rest. After months of training, I wanted to take it easy and just
Post a Comment
Read more 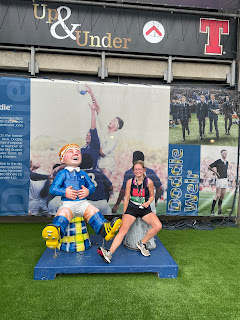 I ran my first in-person 10k race in almost 2 years and am proud that my post-marathon legs could sustain a fast pace. Guest appearance by Oor Wullie. Why Women's 10k My friend/colleague Kez made a comment about running a 10k with me. I wasn't entirely sure if she was being serious, but I told her about the Women's 10k coming up, and she said yes. I had not run an in-person 10k race since the Aberystwyth Charity 10k, the last of my 2019 10k races . I was quite excited at the idea of doing a 10k race again. A Castle start The race started on the Royal Mile near the Castle. It made for a great backdrop for our pre-race photos. Kez and me. Mandatory jump. It was a rainy morning, so we were lucky to get blue skies for the race. Skipping the queue I'm conscious of the fact that I obsessively talk about toilets on this blog, but it's an important part of the race experience.  The Women's 10k probably had the fanciest setting for porta-potties with the Castle right beh
Post a Comment
Read more 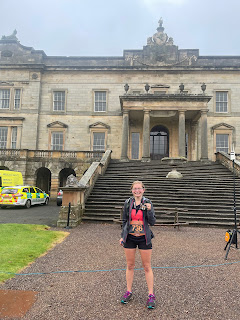 I did my first duathlon (run 5k, bike 25k, run 5k) a week after my first marathon and managed to run my second 5k at a faster pace than my first. Last week a marathoner, this week a duathlete. Why Edinburgh Duathlon A job well done to online advertising. I saw the Edinburgh Duathlon advertised on my Facebook feed. I only started cycling last year when I got a bike during lockdown. This seemed like a good local opportunity to try out cycling racing in addition to running. I posted a message about it on a running Teams channel at work and ended up doing the duathlon with my friends/colleagues Billy and Stratos. The duathlon was originally scheduled for April, but because of Covid, it got delayed to October. One week of my marathon. So no, I didn't originally sign up to race a duathlon right after a marathon. An early start The race started at 8am. I set my alarm for 5:10am. It was still dark when we got to Gosford House in East Lothian where the race was held. (The Edinburgh Duathlon
Post a Comment
Read more
More posts